Historical Perspective of "To Kill a Mockingbird": 13th Amendment

Thirteenth Amendment, amendment (1865) to the Constitution of the United States that formally abolished slavery. Although the words slavery and slave are never mentioned in the Constitution, the Thirteenth Amendment abrogated those sections of the Constitution which had tacitly codified the “peculiar institution”: Article I, Section 2, regarding apportionment of representation in the House of Representatives, which had been “determined by adding to the whole Number of free Persons, including those bound to Service for a Term of Years, and excluding Indians not taxed, three fifths of all other Persons provided for the appointment,” with “all other persons” meaning slaves; Article I, Section 9, which had established 1807 as the end date for the importation of slaves, referred to in this case as “such Persons as any of the States now existing shall think proper to admit”; and Article IV, Section 2, which mandated the return to their owners of fugitive slaves, here defined as persons “held to Service or Labour in one State, under the Laws thereof, escaping into another.” 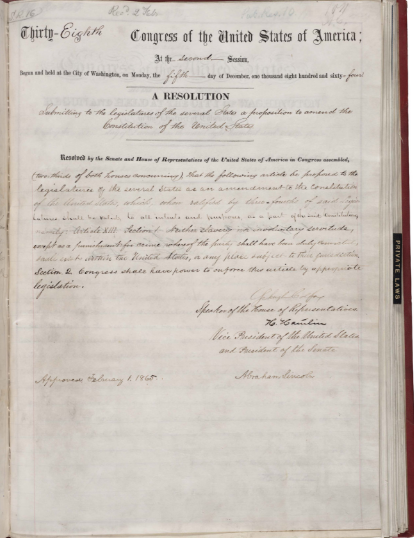 Abraham Lincoln's Emancipation Proclamation of January 1863 has been attacked as legally dubious because it purported to free people in areas beyond the Union's control. But at the very least it stimulated national debate about the formal end of slavery in America, and changed the very nature of the Civil War, confirming it as a clash of social orders as much as one of armies. By December 1863, as part of his war strategy but looking toward the war's end and the end of slavery, Lincoln put forward his "Ten Percent Plan." Aimed at bringing Confederate states back into the Union, Lincoln's plan would offer pardons to Confederates (except the highest government officials) who would swear loyalty to the Union and pledge to acknowledge slavery's end. If 10 percent of the state's prewar voters swore such an oath, they could seek readmission for their state into the Union, but only under a new state constitution that prohibited slavery. If the Lincoln plan's emphasis on the ending of slavery was the germ of the Thirteenth Amendment, its limitations inspired the Fourteenth and Fifteenth Amendments. For while the proposed new state constitutions must ban slavery, the Lincoln plan did not require that they guarantee civil rights for former slaves. Abolitionist Wendell Phillips argued that the plan "frees the slave and ignores the Negro," and radicals of Lincoln's own political party developed plans for guarantees of political and civil rights for the freedmen.