Historical Perspective of "To Kill a Mockingbird": 14th Amendment

Fourteenth Amendment, amendment (1868) to the Constitution of the United States that granted citizenship and equal civil and legal rights to African Americans and slaves who had been emancipated after the American Civil War, including them under the umbrella phrase “all persons born or naturalized in the United States.” In all, the amendment comprises five sections, four of which began in 1866 as separate proposals that stalled in legislative process and were amalgamated into a single amendment. 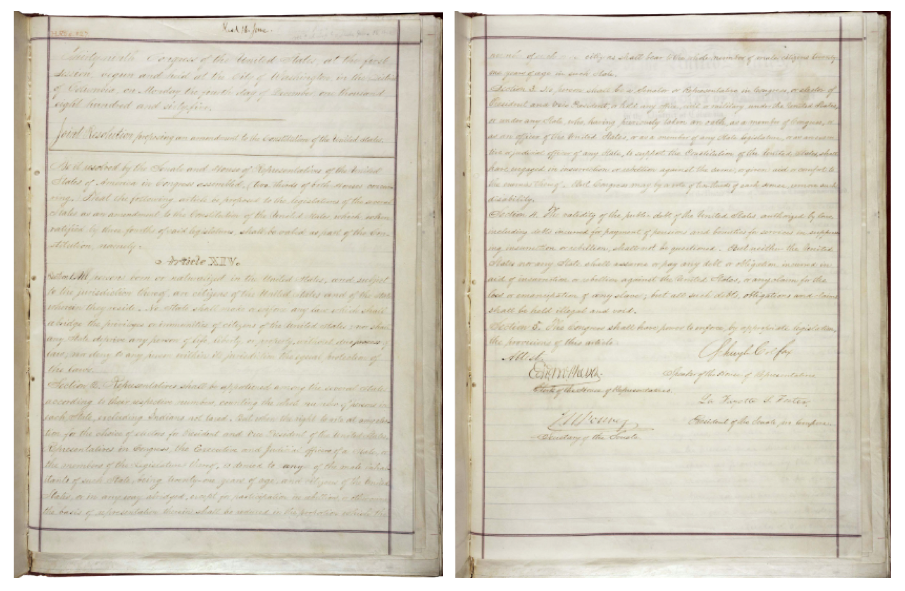 The passage of the Thirteenth Amendment removed the slave condition, but did not clarify the civil or political status of the freedmen. Indeed, without some clarification, the former slaves could have been seen as wards of the federal government. The nation's political leaders struggled with what the political condition of the former slaves should be, and they did so against the background of debate about the nature of Reconstruction. As the parties argued in late 1865 and 1866, reports reached the North of violence and intimidation against former slaves. In addition, most of the newly reconstituted Southern legislatures passed "Black Codes," severely restricting the political and civil rights of the freedmen and reducing them to a status as close to slavery as possible. The Republicans at first tried national legislation, like the Freedmen's Bureau Bill, but its renewal was vetoed by President Andrew Johnson. Johnson, bent on rapid reconstituting of the Union, declared Reconstruction over in December 1865, when the last of the postwar loyalist governments was seated in the South, and vetoed the historic Civil Rights Bill of 1866. This veto galvanized the Republican Party. Moderates joined Radical Republicans to muster the constitutional majority to repass the bill over Johnson's veto, the first time in American history such an event had happened.