Historical Perspective of "To Kill a Mockingbird": Scottsboro Trial

US History in Context - Image 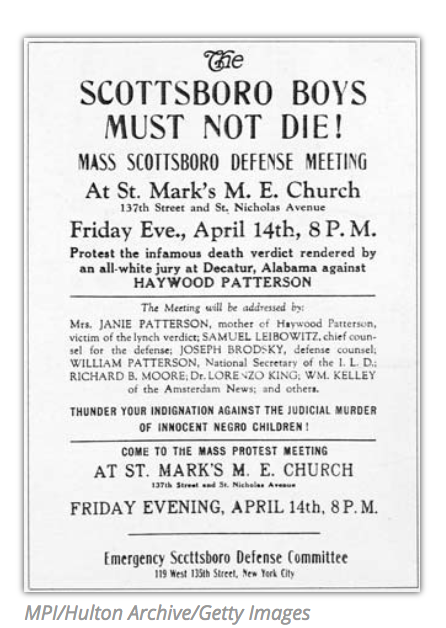 Scottsboro case, major U.S. civil rights controversy of the 1930s surrounding the prosecution in Scottsboro, Alabama, of nine black youths charged with the rape of two white women. The nine, after nearly being lynched, were brought to trial in Scottsboro in April 1931, just three weeks after their arrests. Not until the first day of the trial were the defendants provided with the services of two volunteer lawyers.

Despite testimony by doctors who had examined the women that no rape had occurred, the all-white jury convicted the nine, and all but the youngest, who was 12 years old, were sentenced to death. The announcement of the verdict and sentences brought a storm of charges from outside the South that a gross miscarriage of justice had occurred in Scottsboro. The cause of the “Scottsboro Boys” was championed, and in some cases exploited, by Northern liberal and radical groups, notably the Communist Party of the U.S.A.

Most Americans, indeed many international observers, held strong opinions about the Scottsboro Boys during the 1930s. To southern whites, these nine African-American teenagers had inflicted the gravest of injuries—rape—on two white girls while hitching a ride on a train through northern Alabama on March 25, 1931, near the town of Paint Rock. However, as the facts of the case became known outside the South, “Free the Scottsboro Boys” became a rallying cry for the Popular Front, the civil rights movement, the northern wing of the Democratic Party, the northern and global press, and a host of writers, artists, and intellectuals.

Although their trials generated two Supreme Court rulings, Powell v. Alabama, 287 U.S. 45 (1932) and Norris v. Alabama, 294 U.S. 587 (1935), the significance of the Scottsboro Boys cases lay less in their legal precedents than in their broader social and cultural impact. In their protracted struggle for freedom, Clarence Norris, Ozie Powell, Charlie Weems, Olen Montgomery, Willie Roberson, Haywood Patterson, Eugene Williams, and Andy and Roy Wright attracted unprecedented attention to the savage inequalities of the Jim Crow South, helping to shatter the fragile national compromise on racial inequality forged after Reconstruction. They symbolized the yawning gulf between what sociologist Gunnar Myrdal (1898–1987) would later call the “American creed” of equal citizenship, including equal treatment before the law, and the all too typical reality of kangaroo courts, all-white juries, and lynch mobs. In addition, their youthful status highlighted the effects of racism on the vulnerable psyches of children and adolescents.